Beau Rivage Hotel: a charming hotel at the water's edge

No doubt the most beautiful location near the Gérardmer lake…

Ideally located on the bank of the Gérardmer lake, at the base of the Vosges mountains covered with green pine trees all year long, Beau Rivage *** hotel is only a 5-minute walk from the town centre. Facing the west, it offers a view of the sunset, the lake and the mountains.

Its location makes the Beau Rivage hotel the ideal place to organise leisure and business trips in the Vosges, very close to the Alsace region, the route des vins (wine road) and the route des crêtes (summit road). 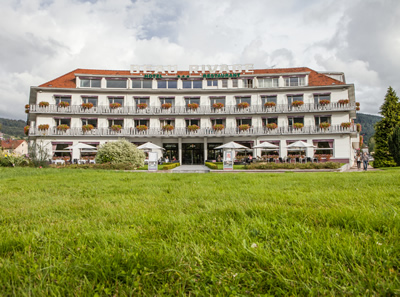 Rebuilt in the 50s, the Beau Rivage hotel has maintained its original character. Its volume and the elegance of its colours unite comfort and modernity at the heart of the authentic nature of the Vosges mountains. This charming establishment offers, in the pure French hotel tradition, all of the infrastructures necessary to make your stay go smoothly (services, gourmet restaurants, swimming pool and spa), accessibility and proximity to the main local activities.

A few words about the history of the Beau Rivage hotel

The building constructed in 1864 by Mr. Thomas was for a long time a large residence without any other intended use, until 1974 when it became an inn. Several owners came one after the other over the years and in 1894 a cafe-restaurant came to life known as "Restaurant du lac". Two years later the building became a 3-floor hotel and took its current name, the Beau Rivage. The hotel-restaurant whose situation next to the lake is known as the most beautiful of the much sought after Gérardmer tourist resort, was owned and run by Mr. Henri Scheidig from 1929 to 2000.

In 2000, the present owner, M. Michel Harasse, purchased the Beau-Rivage hotel and had it virtually totally renovated. The "New" Beau Rivage opened its doors in March 2001. In 2002, the "Côté Lac" restaurant was completely renovated, then one year later, the lounges near the restaurant were created as well as suites on the top floor. 2004 saw the construction of a new building which houses the "Toit du Lac" restaurant with its panoramic view on the second floor, as well as 4 modular seminar rooms, 4 executive rooms, a spa and a swimming pool. In 2005, the terrace in front of the Beau Rivage hotel was refurbished, allowing clients of the hotel and restaurant to enjoy the incredible view.

In 2011, a new massage room, relaxation room and smoking lounge were created, then in 2012-13 a large number of the rooms facing the lake were renovated. During recent years, the Beau Rivage hotel, buoyed by the refound splendour of its early days, the location facing the lake and the majesty of its architecture, has hosted prestigious gala dinners, culinary, cultural and sports events. End of 2015: Creation of 5 additional rooms on the 3rd floor including 3 new suites. 2017 to today : Extensive global renovation program

In the heart of the Gérardmer the "Pearl of the Vosges", only about 55 km from the beautiful towns of Kaysersberg and Riquewihr, you will take advantage of the peace of the magnificent landscape of the Vosges mountains, but also Lorraine gastronomy in the Beau Rivage restaurants (Côté Lac and Toit du Lac), or in the other restaurants of the Compagnie des Hôtels des Lacs (La P'tite Sophie, Les Jardins de Sophie).

Your taste buds will be spellbound when discovering the traditional flavors of the Côté Lac restaurant and the flavors from elsewhere in the lounge of the Toit du Lac.

All while maintaining its charm, the Beau Rivage receives a national and international clientele, for leisure, business and special events. That's why it has reception halls/meeting rooms with modular capacity for up to 300 people. 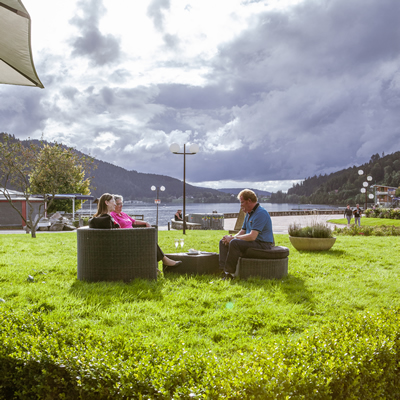